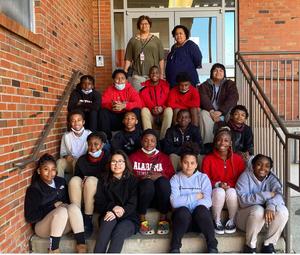 Every 7th-grade student in fourth-period math class at Philadelphia Middle School showed noticeable growth on their second round of benchmark testing at the end of the fall semester.
By JOHN LEE

Every, single 7th-grade student in fourth-period math class at Philadelphia Middle School showed noticeable growth on their second round of benchmark testing at the end of the fall semester.

Melanie Hopkins, the math teacher, said these tests covered everything she taught her students throughout the first half of the school year, which included ratios, proportions, and percentages. She said she was incredibly proud to see every student show some improvement.

“My students love the ratios and proportions,” Hopkins said. “Seeing my students grow, learn and make a difference is the best part of this. I’m proud of them. Our goal is to get everyone to a score of 4 or 5, and we’re moving in the right direction.”

Hopkins said everyone in her class went up from their previous benchmark test at the end of the first nine weeks in September by at least a point or 1.25.

“One of my students is currently at a 3B and is moving in the right direction,” Hopkins said. “She started at a 1B and went up to a 3B. Everyone in the class is on track to get to a 4 and a few might get to a 5 on the next benchmark test. 5 is the highest score.”

To help each student get proper assistance, Hopkins and Scales used scaffolding, a type of teaching that breaks up the learning into chunks and takes the students from where they are and build them up. When scaffolding reading, for example, the teacher might preview the text and discuss key vocabulary or chunk the text and then read and discuss as they go along.

Peggy Scales, inclusion and resources teacher at Philadelphia Middle who assists Mrs. Hopkins with her math class, said mathematics is no longer just a list of simple math problems.

“These problems are real-life scenarios, and you have to teach students to break down those scenarios and learn about them before they solve the problems,” Scales said. “From what I’ve noticed, the more you connect a scenario to a real-life situation, the more the students understand it.”

Scales said the biggest challenge for her and Mrs. Hopkins was the varying levels of capability from the students.

“You’re trying to guide each student to the same endpoint, but since they’re at so many different levels, it’s a challenge,” Scales said. “We have to break it up and make sure we give the proper assistance to those who need it. Right now, the biggest thing is to encourage students to do the very best they can. This time of year, spring fever is coming around, and we’re nearing the end of the school year, so we want to push them to make sure they do the best they can.”

Scales said since all the students in her class improved their scores, it means they are all moving towards the goal.

“No one fell back, and no one stayed stagnated,” Scales said. “5 score is advanced, a score of 4 is proficient, and 3A and 3B is considered passable. Anything below that is below average. Students improving their scores gives them points with the Mississippi Department of Education, so it not only helps them, but it helps the school as a whole.”

Scales said the next benchmark test, which will cover geometry, is the week before Spring Break, March 7 through March 11. She said right now she is working with students and making sure all of them are properly prepared for it.”

“We have some great students at Philadelphia High, and I’m happy they have the opportunity to show it,” Scales said.